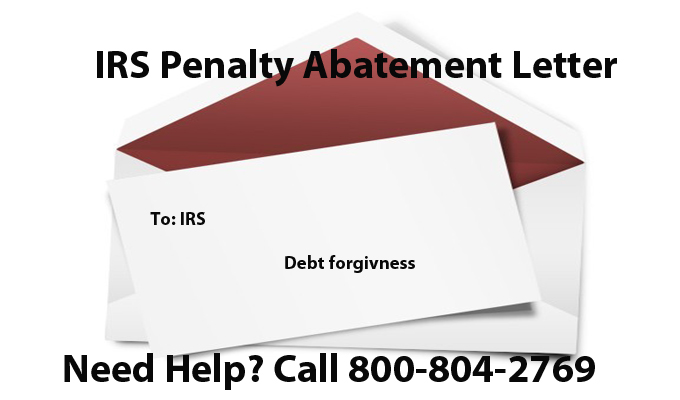 An IRS penalty abatement letter is put in place to regulate the issue of tax debt relief.

Twelve years back, the IRS created an administrative waiver known as an FTA (first-time penalty abatement administrative waiver), which serves the purpose of mitigating taxpayers’ tax penalties. Primarily, the purpose of the FTA also called the IRS penalty abatement letter, is to permit businesses and individual taxpayers to request abatement of certain penalties (which has been assessed by the IRS against taxpayers for the very first time). In reality, the IRS rewards taxpayers that comply with this policy with thousands of dollars. Although the IRS penalty abatement letter is an administrative waiver, it does not apply to other types of penalties. Although there are numerous advantages of this IRS penalty abatement letter, only a few taxpayers are aware of its benefits, and only these few request FTA according to data collected from the office of the Treasury Inspector General for Tax Administration (TIGTA) in 2012. According to this report, the problem is two-fold: firstly, many taxpayers and tax professionals are unaware of FTA, and secondly, the representative of the IRS frequently falsely disallows the issuance of FTA when using the IRS’s faulty automated decision tool to create penalty determinations. These problems make FTA hidden to most taxpayers and tax professionals that are presumably not aware of how it works or know whether it even exists and how to request it.

The collection letter that leaves the IRS office to business and individual taxpayers varies depending on the tax issue to be addressed. An example of such a letter includes Delinquent Return Refund Hold (CP 88), Reminder Notice – Balance Due (CP 501), Second Request Notice – Balance Due (503), Final Notice & IRS Intends to Levy – Balance Due (CP 504) and so on. Most of these letters contain specific instructions to help in the completion of a tax return. Keep in mind; it is very important that the letter received must be reviewed to compare the information on the letter and that of the taxpayers provided during the questioning period. Another important thing to note is that each time taxpayers are submitting any information to the IRS or any other organization that deals with tax matters; it is advisable to keep copies of each document for record purposes.

The Penalties that FTA Covers

This administrative relief or waiver granted by the IRS to individual and business taxpayers is only applicable to taxpayers that fail to file a tax return, pay on time, and/or to deposit taxes when due under the IRS first-time penalty abatement administrative waiver (FTA) Policy.

To qualify for the FTA waiver, individual and business taxpayers must meet the following requirements:

How Do Taxpayers Apply For First Time Penalty Abatement?

For every taxpayer, applications for first-time penalty abatement may be accessed through either of these means; online, over the phone or in writing. In most cases, the IRS grants eligible applicant tax debt relief on the spot. While in other cases, the IRS agrees to wipe out the penalties, but not until the tax debt is paid in full.

It is beneficial for taxpayers to seek consultation from a tax attorney and or tax lawyer for the instant qualification of the first-time penalty abatement policy from the IRS. Our tax relief professionals are experienced in getting taxpayers out of their tax penalties. For instant tax relief, call us today.

When You Need to Withdraw Retirement Money Early

No matter how much you might plan, unexpected events occur and sometimes you are forced to withdraw funds from your retirement savings early. While this

YOU COULD GET MONEY JUST FOR FILING A 2021 TAX RETURN

The IRS is now sending out special reminder letters to people who appear to qualify for the Child Tax Credit (CTC), Recovery Rebate Credit (RRC),

IS YOUR BUSINESS READY TO REPEAT A PREVIOUS YEAR’S TAX SEASON?

Our tax attorneys, CPAs, Enrolled Agents, and tax experts can handle the tax obligations of your business. Right now, it might be very difficult for

BUSINESSES AND INDIVIDUALS MAY HAVE TO FILE THEIR TAX PAPERS AGAIN

Here’s something that may be hard to swallow. The IRS is saying that In some cases businesses and individuals may need to send in certain

Now is an excellent time to check your withholding. Even if you are getting a refund on your 2021 taxes, changes in your life could

YOU DESERVE THE BEST
"GET YOUR FREE CONSULTATION"

WE OFFER TAX DEFENSE NATIONWIDE! WE SERVICE ALL 50 STATES.

© All Rights Reserved by LegalTaxDefense.com

Get the latest tax tips & news in your inbox

WE PROVIDE LEGAL HELP TO RESOLVE STATE AND IRS TAX PROBLEMS! We have tax professionals consisting of tax defense attorneys and certified enrolled agents that can help resolve tax problems for individual taxpayers and business owners.